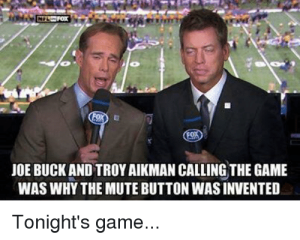 Unless you’ve been living under a rock, or really don’t give any level of fuck about sportsball, you are aware that the Kansas City Chiefs are playing in the Super Bowl on Sunday. This is our first Super Bowl appearance in fifty years.  As a proud and life-long Kansas Citian I could not be more excited. And at the age of forty, I have been waiting for this game since ten years before I was born.

There is only one thing that has the potential to negatively impact this important moment for my team and my city. That thing is Buck-Toothed Joe Buck and his merry band of fucktard idiots. Anytime I hear them commentate, I roll my eyes. Buck proved his unapologetic bias against Kansas City in 2014 and in 2015 when the Kansas City Royals made the World Series in back to back years. And the rest of his broadcast team is equally bias and inept.

Seriously, he couldn’t have swung on the nuts of the opposing teams any harder if he was Tarzan.

As such, with the authority I am giving myself, I am issuing a proclamation that Buck & Co be replaced as Super Bowl commentators, and that a team with more integrity and cognitive ability be put in place.

WHEREAS, it has been fifty actual years since the Kansas City Chiefs have made the Super Bowl and as long-suffering fans, we really fucking deserve this, and

WHEREAS, the only thing that Chiefs fans have suffered longer than a Super Bowl drought is repugnant coastal bias, and

WHEREAS, St. Louis idiots mistake the Mississippi River for the Atlantic Ocean and as such ignorantly believe themselves to be an east coast city and present with all the misguided, pretentious elitism that goes along with it, and

WHEREAS, St. Louis, was of course, where people abandoned hope and died of dysentery trying to make it to Kansas City which deepens their resentment, and

WHEREAS, Joe Buck is a St. Louis bred fucktard who swings back and forth between the nuts of Cardinal nation and Madison Bumgarner and anyone he feels can beat Kansas City, in anything, and

WHEREAS, Troy Aikman’s concussion addled brain has left him unable to speak in complete sentences and his abilities are further diminished by his jealousy of our vastly superior quarterback and captain Patrick Mahomes, and

WHEREAS, it is a bullshit myth that the Dallas Cowboys are America’s Team, but Kansas City is in fact the Heart of America, and

WHEREAS, a certain not-aging-that-great-blonde on their broadcast team cannot accurately find Kansas City on a fucking map, and

WHEREAS, the fans of the Kansas City Chiefs deserve fair, unbiased and meaningful commentary of our first Super Bowl appearance in fifty years, and

WHEREAS, Buck, Aikman and Co lack the collective cognitive ability to tie their shoes, let alone commentate the most important game of the year,

THEREFORE, be it resolved that I, Brendan Rhyne, life-long Kansas Citian, hereby proclaim that Buck & Co are not allowed to announce or commentate at Super Bowl LIV, and furthermore are  to be replaced with a dream team of Bob Costas, Al Michaels, Jim Nance and Kevin Nolan.