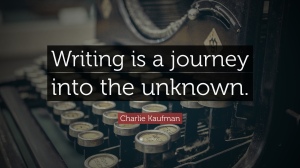 Last week I listened to a podcast called Tunnels, and the creator said something in an author’s note he tacked on to the beginning that resonated with me. He pretty much announced that the first season wasn’t very good (the podcast is on season three) because he was a first time podcaster and was essentially learning on the job. He flat out said that he had no idea what he was doing. And he was right, season two was much better than season one. But more importantly, you could see the creator’s passion for creative content throughout.

This runs completely counter to my life experiences so far. I was raised in a house where accomplishment, achievement and intellect were expectations. It was about the trophies, and winning as though the skills were supposed to be downloaded instantaneously like Neo from the Matrix when he learned Kung Fu. No attention or space was given to the idea of growth, and the idea of sucking at something while you learned, or worse, failing at something, was not tolerated. Period.

As if that wasn’t enough, I went into politics and then nonprofit fundraising. These are two industries where the stakes are high, the learning curve is steep and unforgiving, and consequences for failure are significantly higher than other industries.

I’ve let the fear of criticism be a primary motivator in my life for far too long. And it has prevented me from doing the things that I actually want to do.

In short, the idea that is okay to suck at something while you are learning how to do it is foreign to me. This discovery is like a brand new tool I am just learning how to use. I can already tell I am going to like it. This concept plays well with my constant sense of wonder and imagination, the two things that most fuel my creative drive.

This concept, which puts attention on the journey and the growth, is going to be key in terms of pushing myself to put my work out there. I’ve been so worried about creating superior quality,  that I forgot that creative writing degree and talents as a wordsmith in and of themselves are not enough. It is a good start, maybe even a running start. But it is a running start on a long journey, and knowing that it doesn’t have to be perfect is definitely going to help with creative paralysis, in fact it already is.

The ghosts of our past don’t have to define or present and don’t get to define our future.